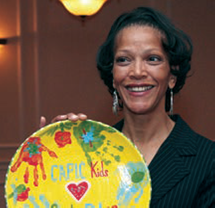 Richelle Cromwell has been the Executive Director at CAPIC, Inc. since 2019. During her tenure, CAPIC has addressed the issues of poverty among the tri-city service delivery area for Chelsea, Revere and Winthrop. Through the partnerships cultivated during her tenure, CAPIC has addressed the problems of homelessness, eviction prevention, substance abuse, childcare, energy assistance and hunger afflicting area residents.
As a lifelong resident of Chelsea Ms. Cromwell’s affiliation with CAPIC began as a board member - in which she served for 10 years -- before transitioning into the role as President for her remaining 15 years on the board. Prior to joining CAPIC as the Executive Director, she was the sole proprietor of her own business for 25 years in the interior design industry. She holds a Fashion Design degree from Newbury College.

First came to CAPIC in 1993, working in the Housing Intercept Program; joined CAPIC’s Management Team in 1999 as the Agency’s Grant Manager, and in 2008 was named the Director of Planning & Development for the Agency. Kerry works directly with the Executive Director, Fiscal & Human Resource Managers, as well as Program Directors to strengthen the Agency’s development capacity, assess agency needs, and create and implement agency-wide goals and objectives to achieve the mission and vision of CAPIC. Such work includes the preparation of the Agency’s Strategic Plan, Community Needs Assessment, annual work plans, program progress reports, and all required grants and reports for major funding sources including the state and federal government. Since 2004, Kerry has also served as the Agency’s liaison to the City of Revere, specifically, the Revere Police Department, and is solely responsible for the design, development, research, analysis, evaluation, and contract management of all public safety and law enforcement initiatives. Kerry graduated from Assumption College in 1993 with a Bachelor of Arts degree in English and Communications.

Dolores Benoit, Director of Human Resources, first came to CAPIC in 1994 as an intern to do a public relations project.  Having been focused on education and public service throughout college, Dolores joined CAPIC full time in 1995 in Human Resources.  Today, Dolores manages all aspects of Human Resources for CAPIC management and all programs, including employment law, compliance, policies and procedures, benefits, employee relations, and staffing.  A bilingual upbringing enables Dolores to further serve the agency by fostering more effective communication between management and Spanish-speaking staff and clients.  Dolores graduated from the University of Massachusetts, Amherst in 1995 with her B.A. in Education